The Kuiper Belt Was Discovered in 1992

Though its existence has been hypothesized since the 1930 discovery of Pluto, necessary evidence to prove the existence of the Kuiper Belt wasn’t uncovered until 1992. During the period between 1930 and 1992, multiple astronomers offered ideas about the possibility of a belt just beyond the visible solar system.

The Definition of the Kuiper Belt Is Unclear

The Kuiper Belt is commonly defined as the part of the solar system past the orbit of Neptune that is believed to contain numerous comets, asteroids and other small icy bodies. This general definition fails to give information about the scope and size of this astronomical wonder which would be helpful in understanding its magnitude. Hopefully our Kuiper Belt facts can help you get a better understanding.

Pluto Is Located In the Kuiper Belt

There are three known dwarf planets in the Kuiper Belt: Pluto, Haumea and Makemake. Pluto was actually the first Kuiper Belt Object to be discovered, but the belt remained undiscovered because of the distance of the Kuiper Belt from the sun, and the limits of the technology of the time.

The Kuiper Belt Is Located in Our Solar System

The Kuiper Belt Is Not The Oort Cloud

The Oort Cloud is a hypothetical spherical cloud that is believed to orbit the sun around 100,000 AU, at the outer limits of the sun’s gravitational field and the limits of our solar system. It is believed that the cloud is composed of icy planetesimals and lies about midway between the sun and Proxima Centauri, the closest star to our sun.

Over 100,000 Kuiper Belt Objects Are Believed to Exist

There are over 1,000 known Kuiper Belt Objects (KBO), though scientists believe that there are over 100,000 KBOs with a diameter over 100 kilometers. The KBOs are typically made out of methane, ammonia and water, among other things, and are thought of as frozen volatiles.

The Kuiper Belt Is Named After Gerard Kuiper

The Kuiper Belt gets its name from Astronomer Gerard Kuiper, though his contribution to finding the astronomical phenomenon has been questioned. Kuiper hypothesized that a disc composed of small astronomical items was formed early in the history of the solar system as a result of the Big Bang, but believed it didn’t exist anymore. He published these thoughts in 1951.

Some People Call the Kuiper Belt the Edgeworth-Kuiper Belt

The Kuiper Belt is sometimes called the Edgeworth-Kuiper Belt to acknowledge the contribution of Kenneth Edgeworth, who, in 1943, published his belief that the outer solar system was composed of small astronomical bodies left over from the Big Bang.

While Pluto was once included as a planet in our solar system before being downgraded to a dwarf planet, it still has the distinction of being the largest known Kuiper Belt Object. Pluto was also the first KBO discovered, though no one knew it at the time.

Astronomer David Jewitt began searching for objects beyond Neptune in 1987. He encouraged graduate student Jane Luu to help him locate something beyond Pluto’s orbit, saying if they didn’t do it, no one would.

It was five years before they were finally able to announce an object other than Pluto existing in the space beyond Neptune’s orbit. It was the first Kuiper Belt Object (other than Pluto) discovered. They announced their discovery in 1992. Six months later, they located a second object. These announcements are marked as the discovery of the Kuiper Belt because they verified its existence with scientific observation.

When they began their search, Jewitt and Luu had to spend hours looking at a blink comparator attempting to spot differences between images of the area. The introduction of charge-coupled devices allowed for better images and transformed the search by moving it to the computer. This made it easier for Jewitt and Luu to locate the Kuiper Belt.

The Kuiper Belt Is As Old as Time

Other Stars Have Kuiper Belt-like Systems

Unfortunately, our Solar System isn’t as unique as we’d like to think. Astronomers have found at least nine other stars that feature structures close to the Kuiper Belt. If the Kuiper Belt is a remnant of the creation of our solar system, it makes sense that stars similar to our sun may also have structures like the Kuiper Belt in their orbits. The Hubble Space Telescope has been integral in identifying these space formations.

New Horizon Aims To Investigate Pluto and the Kuiper Belt

On January 19 2006, NASA launched New Horizons into orbit. New Horizons will reach Pluto in July 2015 to take a closer look at the dwarf planet and Kuiper Belt Object, as well as its moons. The mission might provide more information about the numerous objects occupying the belt.

Triton May Have Once Been a Kuiper Belt Object

Triton’s retrograde orbit may provide some information concerning its origins. It is believed Neptune’s moon was once a fully formed Kuiper Belt Object that was pulled into Neptune’s orbit. The large moons of Saturn, Jupiter, and Uranus originated as spinning discs of materials around the planets that came together into moons. Those moons orbit in the same direction as their planets. Triton, on the other hand, orbits in the opposite direction of Neptune.

The Largest Dwarf Planet May Have Also Been a KBO

Eris is the largest known dwarf planet in our solar system. It lies past the Kuiper Belt, about 97 AUs from the Sun. It is speculated that Eris, like Titan, was formed in the Kuiper Belt but was perhaps pushed out of the belt by Neptune’s gravity among other factors.

Pluto can thank Eris for stripping it of its planetary status. The discovery of Eris, which is larger than Pluto, led to a necessary discussion regarding what defines a planet. Surprisingly, there weren’t any set rules!

The International Astronomical Union decided that for an object to be considered a planet, it must have cleared the path of its orbit free of other objects. Unfortunately, Pluto is surrounded by numerous objects – over 100,000 objects if estimates are correct. It was downgraded to dwarf planet status and remains the largest known Kuiper Belt object. 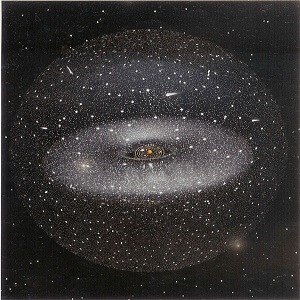 The Kuiper Belt is an astronomical wonder that was discovered in 1992. Its existence had been hypothesized since the discovery of Pluto in 1930. Pluto is known as the largest Kuiper Belt object. The Kuiper Belt is located just past Neptune’s orbit and is 20 AUs wide. It is a disk of astronomical objects, icy volatiles made of methane, water, and ammonia, which may have been around since the formation of the universe.